If you are like most people, you are probably confused over the difference between a French oven and a Dutch oven, as you have heard these terms used interchangeably for the same thing. In this article we will try to bring some clarification on what they are and how they are best used.

Both Dutch ovens and French ovens are round tall pots with a lid. However, there are differences in construction and materials. Historically, Dutch ovens were first made by the Dutch settles in Pennsylvania in the 1700s. They were made of raw cast iron and used over open flame. Their construction has developed over the centuries, but they are generally made with non-stick surface and tend to be heavy in weight. On the other hand, French ovens are cast iron pots, but with enameled coating, so they are basically a type of a Dutch oven.

So why are these terms often used interchangeably? Manufacturers of these pots, like the French company Le Creuset, took the basic concept of a Dutch oven and added the enameled coating. They named the new product a French oven, but the name never stuck and people continued calling them Dutch ovens, especially in the US. While a French oven basically means a higher-end enameled round oven manufactured in France, most people outside France will just refer to them as Dutch ovens.

How to use them?

Dutch ovens have historically been used over open fire in the hearth, and they can still be used over charcoals if you have a back yard barbecue. They can be used both on the stove and in the oven. Cast iron, because it’s so thick and heavy, takes a long time to heat up on electric and gas cook tops, but it is perfect for lengthy oven cooking or baking: it heats up slowly but it retains the heat for a long time even after you take the dish out of the oven. French ovens are can also be used for both stove and oven cooking, but they are usually not as thick and heavy and they heat up more quickly, meaning they cool down more quickly as well. 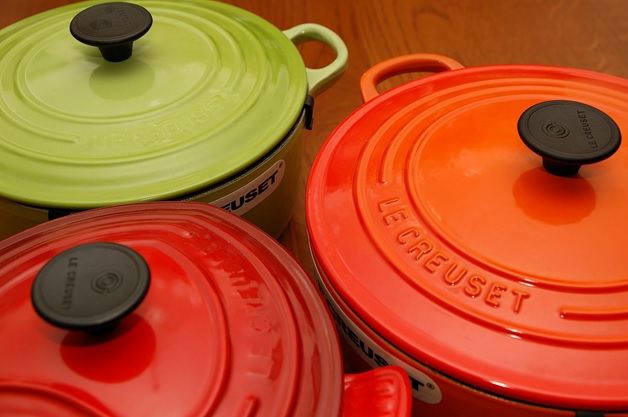 French ovens are generally good for any type of food you want to prepare, and the enamel will do well with any amount of moisture in food as long as there is some. On the other hand, since Dutch ovens don’t have the enamel protective layer, they don’t not cook very well without lots of built up oils and fats. For this reason, they are generally used for moist cooking methods, like braising or making soups and stews, but can also be used for other cooking methods, like baking bread and cake since long, low temperature oven cooking is perfectly suited to cast iron cookware.

French ovens require less maintenance, are easy to clean, and look beautiful. They will benefit from occasional seasoning: heating the pan up and rubbing down with a small amount of oil. Dutch ovens require much more seasoning with oil as they don’t have the enamel layer. Enameled cast iron can stand up to most types of cleaning, as long as it isn’t abrasive, but for rough black enamel, cleaning should be kept to an absolute minimum. Metal utensils should be avoided and you should stick to wooden and silicone based ones.

No matter which ones you choose to use, look for better quality and longevity, as well as the design, there is a wide selection of both at Peter’s of Kensington. You are likely to enjoy colorful designs more and you can use serve food directly from them if they are decorative.